​
​Austyn Dineen, President
​A Colorado native from Colorado Springs, Austyn moved to Breckenridge over a decade ago after graduating from Colorado State in Fort Collins with a degree in mass communication and technical journalism. On the TLC Board of Directors since 2017, Austyn has held numerous strategic public relations roles throughout her time in the mountains at Breckenridge Tourism Office (BTO), Breckenridge Ski Resort, Copper Mountain Resort, and Swift Communications. Today she hangs her hat at Backbone Media, a media agency that is based in Carbondale and Denver, as a Associate PR Director. You can find Austyn doing all the things outside with her two boys, Forest and Fischer, her husband, Ryan, and their dog, Barley. She is a passionate about the wacky mountain lifestyle that Colorado is known for and energized by being able to greet 95% of Breckenridge’s residents by name and a smile.

Michelle Mahoney, Vice President
Originally from Connecticut, Michelle moved to Denver in 2009. After spending seven years there she realized city life was not for her and moved to Breckenridge in 2016.  She has been in love with this magical place ever since. Michelle has two kids, a daughter Harper and a son Aiden who have both been part of the Timberline family since they were newborns.
Michelle owns a few restaurants in town, Semplice Café, Downstairs Deli, and Dee Dee’s Cart. She has a passion for great food and drink- serving clean healthy food that fuels your body so you can enjoy all the adventures Summit County has to offer. She loves trail running and hiking and enjoying the hot springs.
​
Michelle is passionate about being involved with the staff and school that have helped to mold her children into who they are today and giving back to the community in which her family loves. Tara Gregoire, Secretary
​​A Colorado native, Tara graduated from Colorado State University and headed up to the mountains for a season, which turned into 14 years and counting.  After working in public safety for 11 years, she is now the Executive Assistant and P.E. teacher for The Peak School.

Tara and her husband, Aaron, have two boys; Wilder and Rhodes, who have both been a part of Timberline Learning Center since they weeks old.  She is grateful to be on the Board of Directors for a center that has helped not only her children, but her whole family grow using the child-led Reggio Emilia approach. 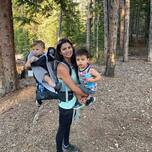 ​Melissa Bohnet
Melissa moved to Denver in 2011 from her home state Michigan.  After owning a cottage in Breckenridge for a large portion of her Denver time, she and her family decided to move where they thrived the most, and became full time residents of Breckenridge in early 2021.
​
Melissa is also on the Board of Summit County Libraries as the Library Foundation Liaison, and runs a small local business, Peace of Mind Property Checks, LLC.
Her two boys, Cole and Breck, started at Timberline in early 2022.  Although her boys only go part-time, Melissa realized how impactful their enrollment has been, and knew she wanted to support Timberline in the best way she knew how.  She hopes her CPA background and passion for early childhood education offers support to the staff and stakeholders.
Melissa enjoys good food, travel, family adventures, and almost all things outdoors.  I’m so grateful my family and I get to be a part of such a wonderful community and influential organization.